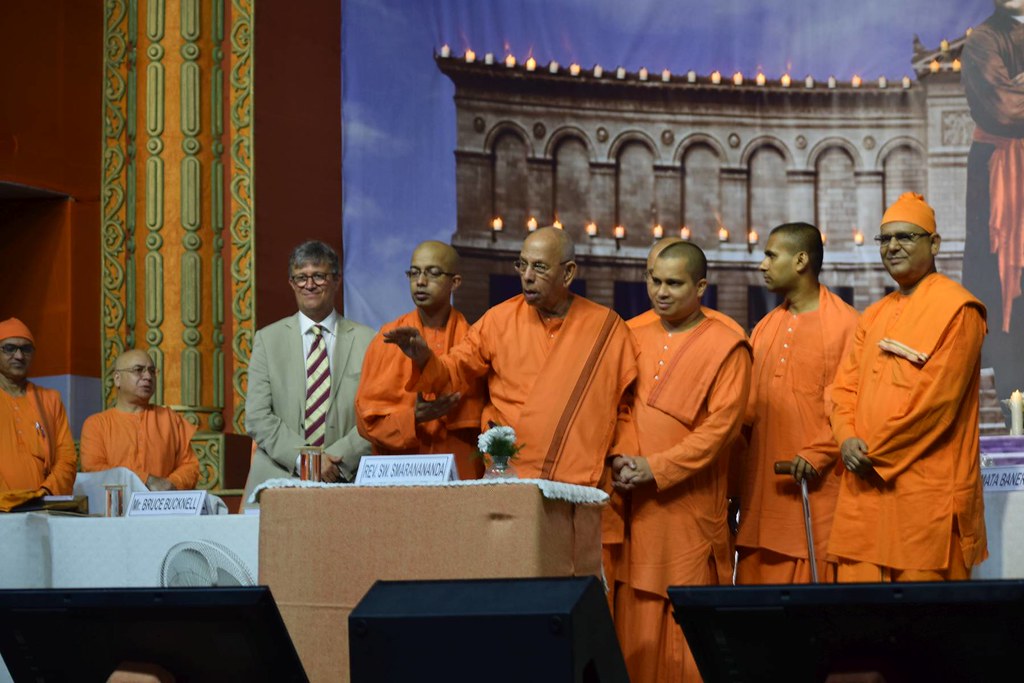 Swami Gautamananda ji is scheduled to return to Chennai on 4 October after his tour of UAE, Zambia and South Africa. He will be visiting Hyderabad and Belur Math from 10 to 14 October, and Belur Math again from 24 October to 5 November. He is in good health.

Swami Prabhananda ji is scheduled to return to Belur Math on 7 October after his visit to Baghbazar centre. He is keeping well.

Swami Shivamayananda ji will return to Kankurgachhi on 12 October after his tour of some places in Assam and Arunachal Pradesh. He is in good health.

Swami Suhitananda ji is scheduled to visit Balaram Mandir and Kathamrita Bhavan from 5 to 10 October. He is in good health.

A sub-centre of Ramakrishna Mission, directly under the supervision of the Headquarters, has been started at Shyamsayer in Bardhaman.

The address of the sub-centre is :

Websites: Malda centre has launched a website with the address <www.rkmmalda.org>.

On 7  September,  the  Governor  of  Illinois  State,  USA,  issued  a  proclamation  recognizing  11 September 2018 as Swami Vivekananda Day in the State of Illinois.

The inaugural programme of the 125th Anniversary of Swami Vivekananda’s Chicago Addresses was held at Belur Math from 10 to 12 September. On 10 September, nearly 4000 students from various schools and colleges came to Belur Math in processions. A public meeting was held on that day in which there were talks and cultural events. The formal inaugural programme, which took  place on 11 September, was presided over by Revered President Maharaj. The Chief Minister of West Bengal Mamata Banerjee, the British Deputy High Commissioner at Kolkata Mr Bruce Bucknell, the General Secretary, and others also spoke in the programme which was attended by about 3500 people. On the following day, 12 September, there was a devotees’ convention in the morning and a youths’ convention in the afternoon which were presided over respectively by Swami Vagishanandaji and the General Secretary. In all, about 9500 people took part in the two conventions. Renowned musicians performed in the evenings of 11 and 12 September.  Students’ Programme | Inaugural Programme | Devotees’ Convention | Youth Convention

On the initiative of Rajkot centre, the Government of Gujarat issued a circular to all schools in Gujarat directing them to arrange for reading out in the assemblies of their schools on 11 September the text of Swami Vivekananda’s inaugural speech at the World’s Parliament of Religions held in Chicago in 1893.

Chennai Math distributed about 12,50,000 pamphlets in English and Tamil containing three Chicago addresses of Swamiji to school and college students and the general public. Subsequently, based on these pamphlets, cultural competitions were conducted, in which hundreds of thousands of students and the general public took part. The prize distribution ceremony was held at a college in Coimbatore on 11 September, in which the Prime Minister of India Sri Narendra Modi delivered a lecture through videoconferencing. Swami Gautamanandaji and several others also spoke during the ceremony. Photos and Report

Coimbatore Mission Vidyalaya held a public meeting on 11 September, which was presided over by Sri Banwarilal Purohit, Governor of Tamil Nadu. A few dignitaries and about 700 students, staff and devotees attended the programme. Photos and Report

Delhi centre conducted an interfaith meet on 11 September in which Sri Pranab Mukherjee, former President of India, was the chief guest.

Guwahati centre held a grand procession and a public meeting on 11 September. Prof Jagdish Mukhi, Governor of Assam, among others, attended the meeting. Photos and Report

The following centres also commemorated the occasion with various programmes such as processions, public meetings, interfaith meetings and cultural competitions in September.

Rahara Boys’ Home celebrated its platinum jubilee on 1 September with special worship, procession and cultural programmes. About 15,000 students and devotees attended the programme. Revered President Maharaj, Swami Vagishanandaji, Swami Shivamayanandaji, the General Secretary and others spoke in the public meeting held on that day. On 14 September, Dr Partha Chatterjee, Minister of Higher Education, Government of West Bengal, inaugurated the newly built extension to the Vivekananda Centenary College building on the centre’s campus, and the General Secretary unveiled a bronze statue of Swamiji in the new building.

Chandigarh centre conducted a three-day programme from 7 to 9 September in connection with the consecration of its newly built Sri Ramakrishna Temple and the diamond jubilee of the centre. Prof Kaptan Singh Solanki, Governor of Tripura, inaugurated the new multipurpose hall and released a commemorative volume on 7 September. The new residential building for monks was also inaugurated on that day. Swami Gautamanandaji consecrated the new temple on 8 September, the sacred birthday of Swami Advaitanandaji Maharaj. Public meetings and cultural events were held on all three days, in which about 130 monks and 2000 devotees participated. Photos and Report

On 11 September, Lumdung centre inaugurated its first service activity by opening a primary school, which is located, for the time being, on the campus of a government school in Lumdung.  Photos and Report

Raipur centre released a digital archive of 56 years of Vivek Jyoti, the Hindi journal published by the centre, on 11 September.   Photos and Report

Revered President Maharaj dedicated Sarada Mandir, the new annexe to the Residential College building of Narendrapur Ashrama, on 16 September. The General Secretary inaugurated the newly set-up digital library there. Several dignitaries and a large number of monks, students and devotees attended the programme. Photos and Report

The headmistress of the Higher Secondary School (Main) of Chennai Mission Ashrama received Dr Radhakrishnan Award on 5 September, the Teachers’ Day, from the Department of School Education, Government of Tamil Nadu, for her contribution to the field of education.

The School Education Department, Government of West Bengal, presented the Best School Award to Purulia Vidyapith in a function held in Kolkata on 5 September. The award consisted of a memento, a certificate and a sum of 50,000 rupees.

The Industrial Training Institute (ITI) of Coimbatore Mission Vidyalaya obtained eighth position in the national level grading of nearly 5000 private ITIs by the Ministry of Skill Development and Entrepreneurship, Government of India.

Two students of Deoghar Vidyapith secured first and second positions in the essay competition, followed by oral presentation, conducted by S N Bose National Centre for Basic Sciences, Kolkata, in September 2018. Apart from them, two other students of the Vidyapith also secured scholarships  from the National Council of Educational Research and Training (NCERT) by clearing the National Talent Search Examination 2018.

A class-12 student of Narainpur centre was selected for the under-18 national football team and played in the Asian Schools Football Championship held in Agra from 20 to 30 September.

Bagda Math conducted a free homeopathic treatment camp at Shyampur village in Purulia district on 9 September in which 92 patients were given medicines. Photos and Report

Guwahati centre conducted a free medical camp at Palahguri village in Morigaon district of Assam on 23 September in which 360 patients were treated.

The new vocational training centre of Hatamuniguda centre was inaugurated on 3 September.

Jhargram centre received a certificate from Vidyasagar College, Kolkata, and Association of Biomedical Sciences, Kolkata, on 29 September in recognition of its performance in school education.

Kankhal Sevashrama held a free haemato oncology camp on 18 and 19 September, in which about 150 patients were examined by three specialist doctors.  Photos and Report

On 16 September, Rajamahendravaram (Rajahmundry) centre conducted a free medical camp at Rampachodavaram, a place mostly inhabited by tribal people.  A team of 13 doctors, including a few specialists, treated 534 patients.  Photos and Report

The thirteenth convocation of RKMVERI (our deemed university) for the faculties of Disability Management & Special Education, General & Adapted Physical Education and Yoga, Computer Science Applications & Research, and Agricultural Education & Research was held at the university’s faculty centre in Coimbatore Mission Vidyalaya on 12 September.  In all, 187 successful candidates of the above four faculties were awarded certificates and degrees.  Swami Gautamanandaji presided over the ceremony and Dr Chandra Bhushan Sharma, Chairperson, National Institute of Open Schooling (NIOS), New Delhi, delivered the convocation address.

Saradapitha centre launched a year-long cancer awareness and prevention programme on 14 September by holding a procession and a seminar.  About 100 people participated in the procession, and 300 people, including many doctors, teachers, students and others, attended the seminar.

Chennai Math conducted, in association with another organization, a day-long workshop on youth empowerment in Chennai on 15 September, which was attended by 250 people from different professional fields. Photos and Report

Delhi centre conducted 19 values education workshops in different places all over India between 10 and 27 September; they were attended by 1159 teachers in all.

Rajkot centre held 12 values education programmes in the centre as well as in different schools and colleges between 7 and 19 September. The programmes were attended by 2925 students.

Salem Ashrama conducted six values education programmes at six colleges in Salem district from 3 to 26 September which were attended by 1130 students in all.

Lusaka centre, Zambia, held a medical camp in the Chawama locality of Lusaka on 22 September in which 106 patients were treated.  Photos and Report