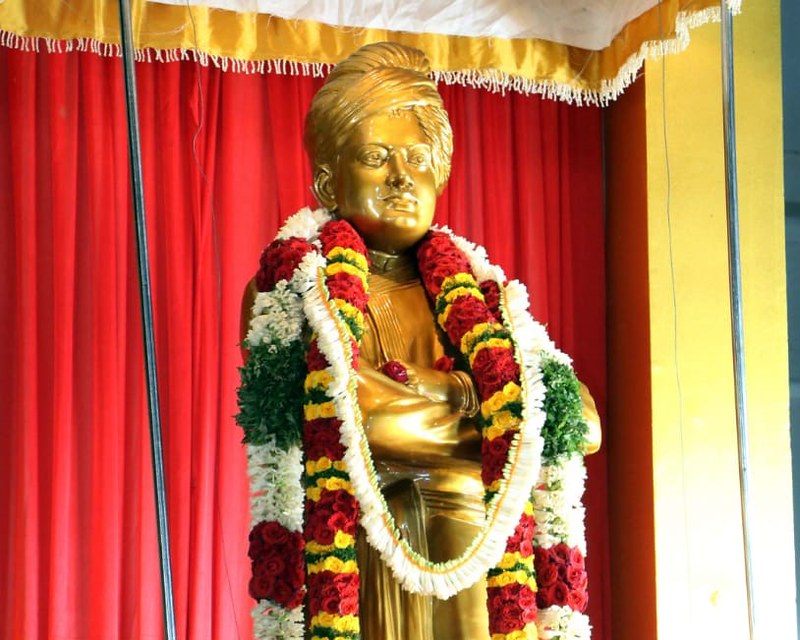 Swami Gautamananda ji is now in Raipur.  He will be visiting Bilaspur from 2 to 7 September, and Shyamla Tal, Mayavati and Almora from 16 to 27 September.

Swami Prabhananda ji returned to Belur Math on 12 August from Seva Pratishthan.  He will remain in Belur Math throughout September.

Swami Suhitananda ji is now in Contai. He is scheduled to return to Belur Math on 13 September after visiting Chandipur and Tamluk centres.  He will be visiting Swamiji’s Ancestral House, Kolkata, from 20 to 24 September.

Swami Girishananda ji is now in Durgapur.  He will return to Belur Math on 13 September after visiting Sundiara and Asansol.  Later on, he will be visiting Ranchi from 18 to 24 September.

The Postal Index Number (PIN) of the Ahmedabad centre has been changed to 380054.

Jamshedpur centre inaugurated the new school building on the premises of its Vivekananda English High School, Sakchi, on 12 August.

The new building at Cossipore Math with a bookstall and a few office rooms was inaugurated on 15 August. 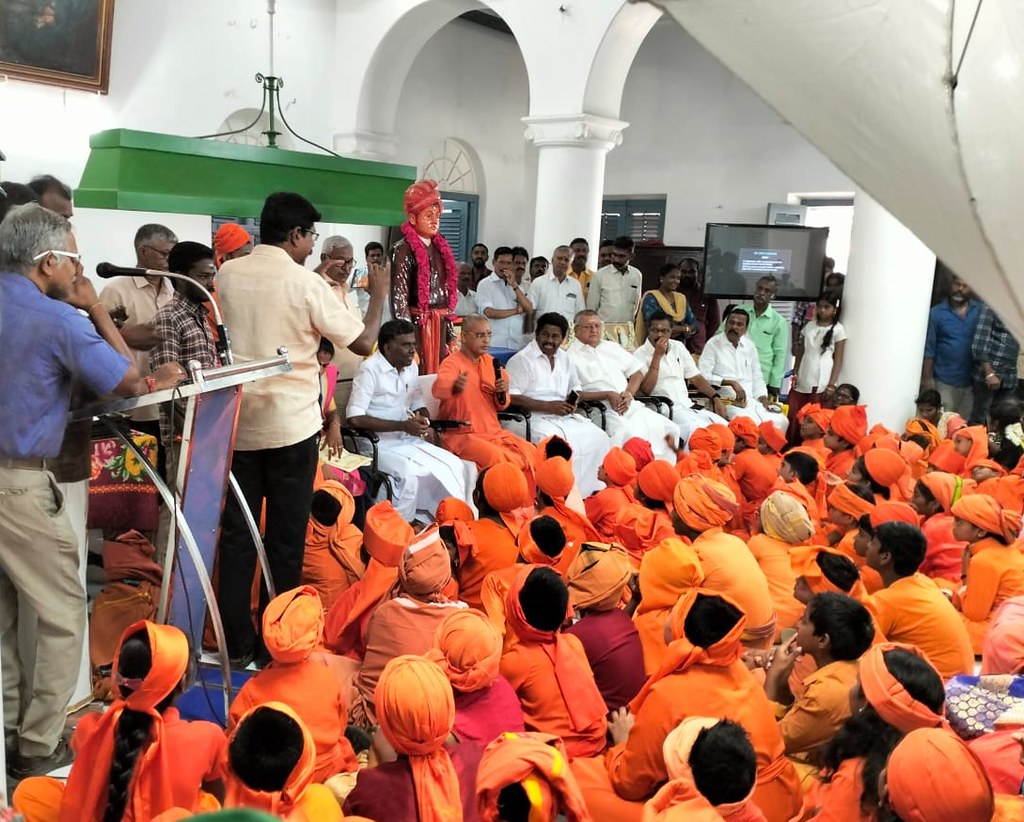 At the initiative of Thanjavur centre, a statue of Swami Vivekananda was unveiled at the Porter Town Hall in Kumbakonam on 15 August.  Swamiji had given a lecture at this place in 1897. 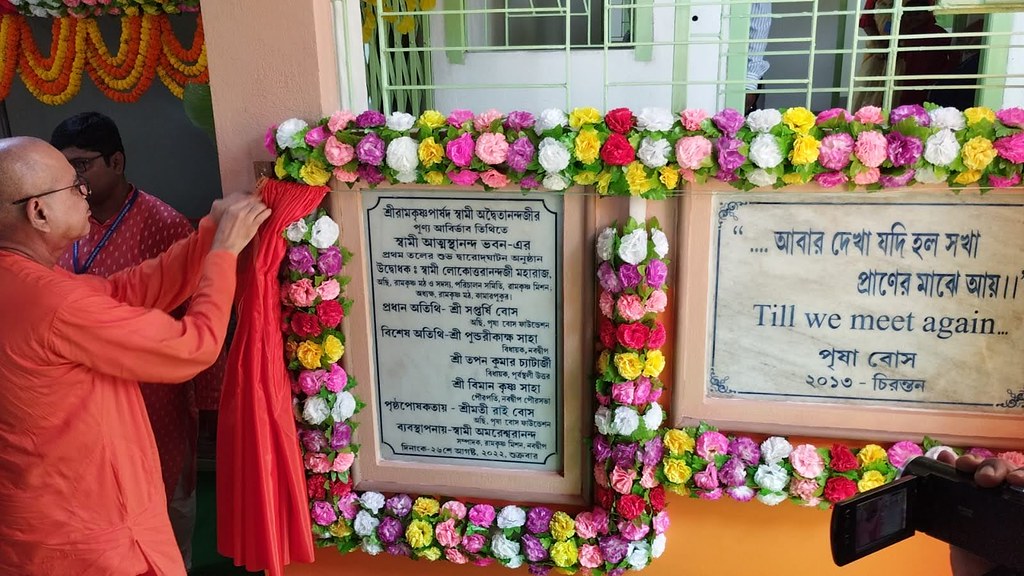 On 26 August, Nabadwip centre inaugurated a building to house a dispensary and coaching centre.

The General Secretary inaugurated the new building with a books showroom and library at Asansol centre on 28 August.

The General Secretary opened the dispensary building at Purulia Vidyapith on 29 August. 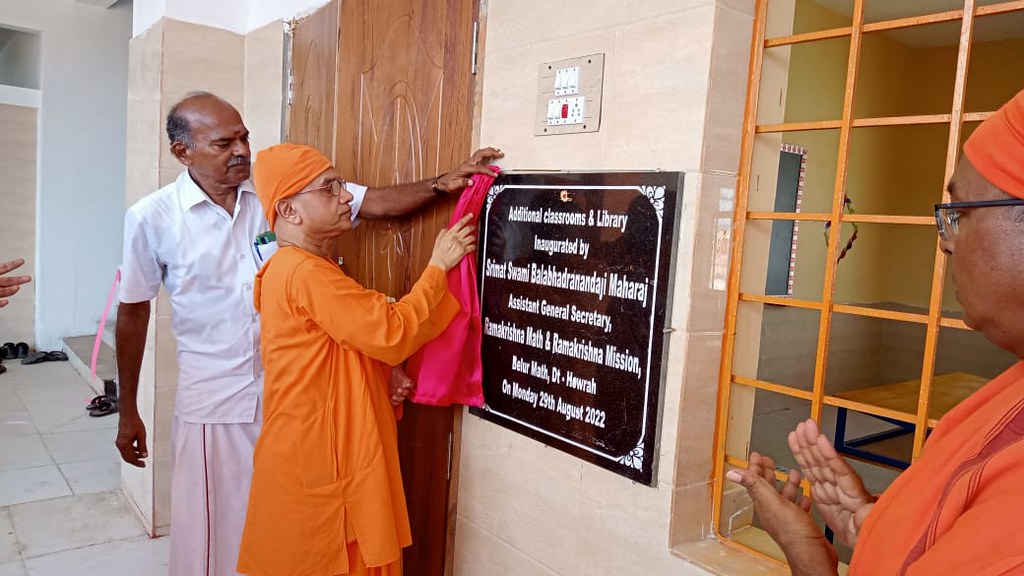 Ramanathapuram centre opened in July last year a school on its campus at Nagachi, a village 18 km away from Ramanathapuram.  The focus of the activities of the centre has since then shifted to this new campus.  Hence, this is now the main campus of the centre.  Its address is: “Ramakrishna Math, Vivekananda Vidyalaya CBSE School, P.O. Nagachi, Dist. Ramanathapuram, Tamil Nadu 623534”.  The ashrama in Ramanathapuram will function as the city centre.

The newly built extension to the school building on the Nagachi campus of Ramanathapuram centre was inaugurated on 29 August.

A student of Chennai Vidyapith achieved the Guinness World Record by playing the longest marathon carrom for nearly 51 hours.

The under-14 and under-17 football teams of Narainpur school won the state-level Subroto Cup Football Tournament.  Both teams have qualified for International Subroto Cup Tournament which will be held in Delhi in September-October.

Ahmedabad Math conducted a youths’ convention on 23 August on the topic “Nation building through character building” in which 1100 students participated.

At the invitation of Chennai Math, 164 students of a school for speech and hearing impaired children visited the Math on 20 August and took part in various cultural competitions especially organized for them.  Prizes were awarded to the winners on the same day.

Delhi centre conducted 11 workshops on values education in offline mode and 6 in online mode, from 29 July to 27 August.  In all, 806 school principals and teachers from different parts of India participated in these workshops.

Bankura: A total of 781 eye patients were screened, 107 were operated on and 53 were given spectacles in July and August. 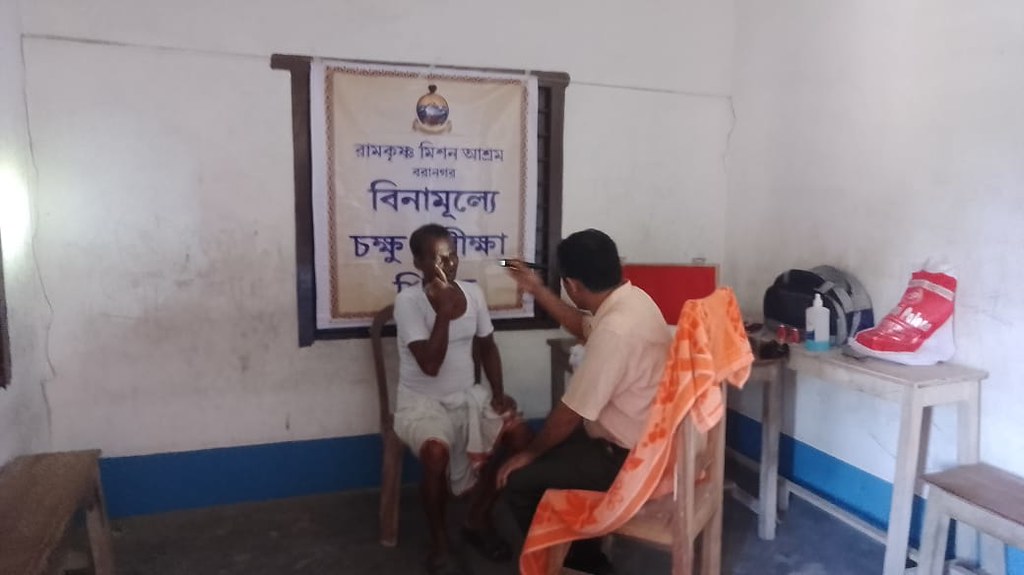 Baranagar Mission: An eye camp on 7 August in which 105 patients were checked and 50 were given spectacles. 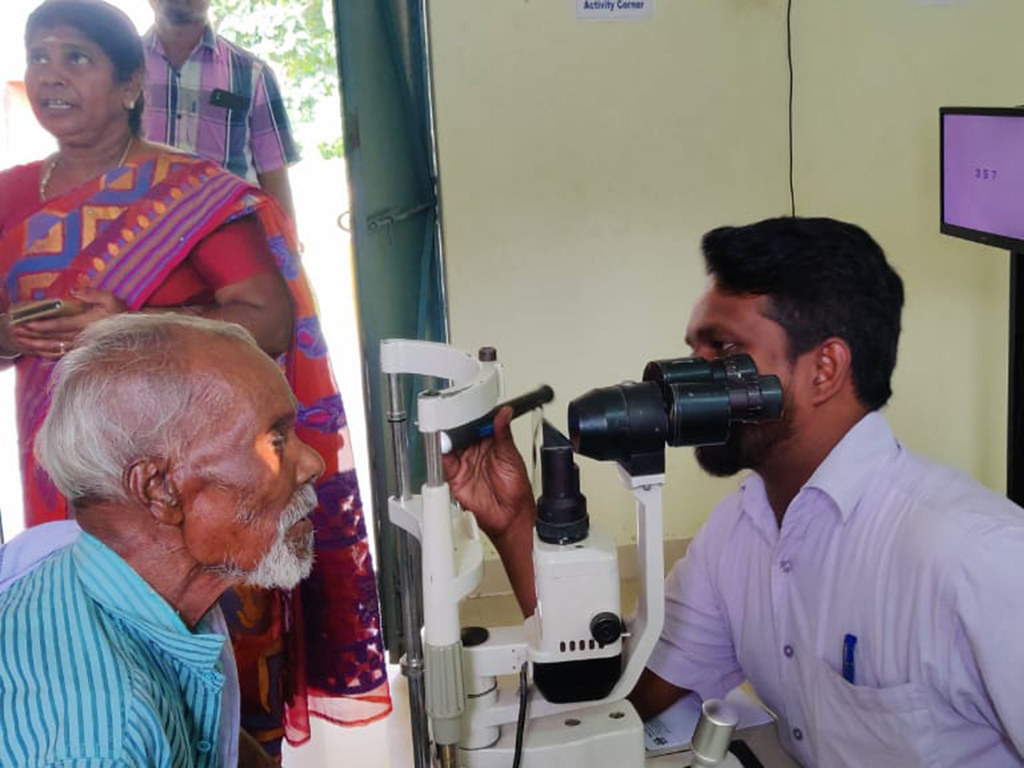 Coimbatore Mission: Six medical camps (1 dental, 1 cancer, 1 orthopaedic and 3 eye camps) in rural and tribal areas of Coimbatore district from 21 July to 20 August in which a total of 282 patients were treated.

Darjeeling: Six medical camps (1 general, 1 orthopaedic, 2 dental and 2 paediatric camps) from 8 July to 21 August in which altogether 232 patients were treated.

Delhi: Eye operations on 9 patients and distribution of spectacles to 4 patients in July.

Gourhati: An eye camp on 1 August in which 66 patients were checked; subsequently, 12 were given spectacles and 5 were operated on for cataract.

Gurap: An eye camp on 19 July in which 43 patients were checked; 5 of them were subsequently operated on at an eye hospital.

Jhargram: A medical camp on 31 July in which 100 patients were treated.

Koyilandy: A health awareness camp on 30 July; vitamin tablets were given to 90 students.

Lucknow: 8895 eye patients were checked and 183 were operated on and given spectacles in July.

Madurai: An eye camp on 21 August – 171 patients were screened, 60 underwent cataract surgery and 17 were given spectacles.

Manasadwip: (i) Conducted an eye camp on 21 August in which 89 patients were treated, and (ii) Arranged cataract surgery for 33 patients on 26 August in association with another institution.

Medinipur: A medical camp at Debagram village of Salboni block in Paschim Medinipur district on 15 August in which 974 patients were treated. 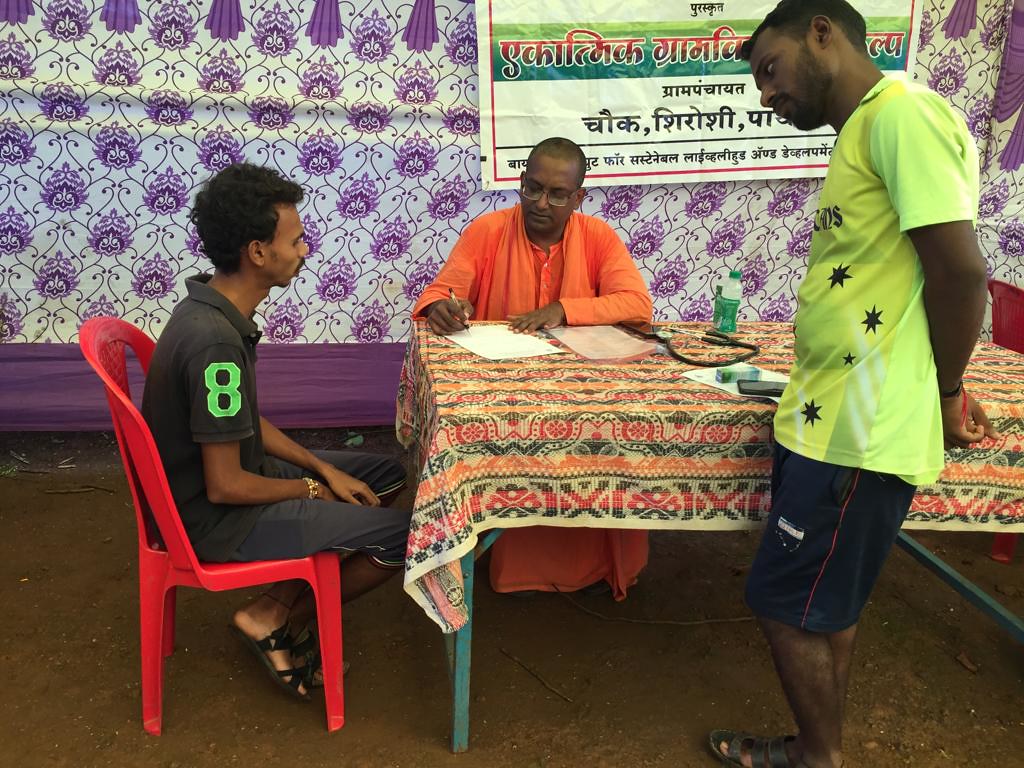 Mumbai: A medical camp at Borsepada village in Palghar district on 21 August in which 135 patients were treated. 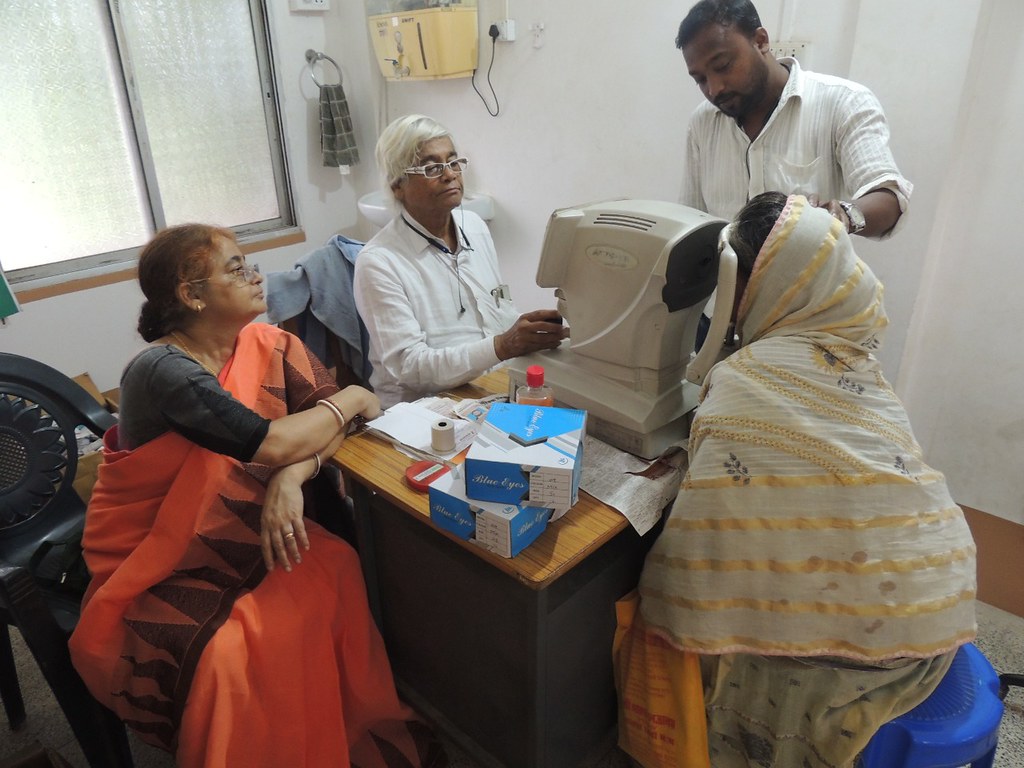 Puri Math: Six eye camps in schools and one at the Math from 25 to 27 July.  In these camps, 909 patients were treated and 9 were given free spectacles.

Rahara: A medical camp at Hingalganj, North 24 Parganas, on 17 July in which 459 patients were treated.

Rajamahendravaram: Three medical camps, including one epilepsy camp, at the centre’s dispensary and Seethanagaram village in East Godavari District on 11 July, 1 August and 9 August in which 950 patients were treated in all.

Ranchi Morabadi: A blood donation camp on 22 July in which 47 persons donated blood.

Salem: Two eye camps on 21 August in which a total of 283 patients were checked; subsequently, 104 were operated on and 38 were given spectacles. We record with sorrow the passing away of Swami Vidyavratananda (Chittaranjan) at Seva Pratishthan, Kolkata, on 30 August at 1.00 am.  He was 65 and had been suffering from paralysis for three years.  Initiated by Swami Bhuteshanandaji Maharaj, he joined the order in 1986 at Belur Math and received sannyasa diksha from his guru in 1995.  He served the order at Belur Math (in Arogya Bhavan) and at Rajkot, Guwahati, Vrindaban, Kankurgachhi, Aalo, Khetri, Agartala, Limbdi, Ranchi Morabadi, Balaram Mandir and Seva Pratishthan centres.  He also participated in relief and rehabilitation work in Maharashtra in 1995 and Andhra Pradesh in 1997-98.  In 2019, he had a cerebral attack leading to paralysis and became incapacitated.  Thereafter, he was living a retired life at Belur Math.  Particular about neatness, the swami was jovial by nature.