Relief and Rehabilitation 2015-16 : A Comprehensive Report 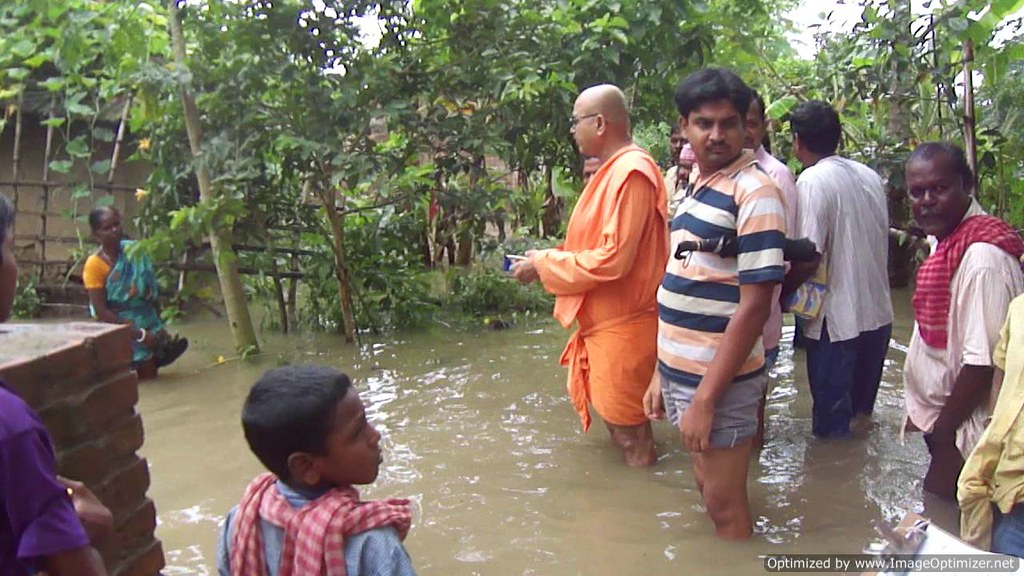 A Comprehensive Annual Report of

(i) Gujarat: Flash floods in Amreli district caused severe waterlogging in many areas. Rajkot centre distributed 2087 educational kits (each kit containing a school bag, a slate, a pencil box, a geometry box, a few notebooks, etc) among 2087 affected students of 13 schools in 11 villages of the district.

(ii) Manipur: Heavy rainfall in a major portion of Manipur led to floods in Thoubal district, affecting hundreds of families. Our Imphal centre distributed 14,646 kg rice, 1190 kg dal (lentils), 1545 kg salt and 772 litres of edible oil among 1815 affected families of Nungoo, Tangjeng Khunjao, Khongyam, Wangoo and Chairel villages from 8 to 18 August. Moreover, medical camps were conducted on 8 and 11 August in which 750 flood-affected patients were treated.

(i) Assam: Guwahati centre distributed, on 6 February, 34 saris, 15 dhotis, 32 blankets, 64 plates, 64 bowls and 32 tumblers among 10 families affected by an accidental fire at Maligaon locality in Guwahati. On 23 June, Silchar centre distributed 116 dhotis, 137 saris, 162 plates, 164 tumblers, 655 packets of biscuits and 170 packets of candles among 85 families of Karatigram (Rangpur) village in Silchar circle of Cachar district; and on 8 February, 18 saris, 13 blankets, 13 mosquito-nets, 27 plates, 27 tumblers, 7 kg milk powder and 27 packets of biscuits among 13 families whose houses had been destroyed in a fire at Ashrama Road in Silchar town.

(a) Andhra Pradesh: Visakhapatnam centre continued relief operations among the victims of Hudhud Cyclone by distributing 3300 solar lanterns from 7 to 24 June to 3300 families in 67 remote villages of Visakhapatnam and Vizianagaram districts. (b) West Bengal: Barasat centre distributed 320 saris, 320 tarpaulins, 318 umbrellas, 320 bed-sheets and 320 utensil-sets from 31 July to 6 August among 320 affected families living in temporary relief camps in Ashoknagar and Habra municipality in North 24 Parganas district. Contai centre distributed 808 kg chira, 189 kg sugar and 596 packets of biscuits among 135 families at Bhagawanpur-2 and Etaberia blocks in Purba Medinipur district on 6 August.

Fiji: In the wake of the devastating cyclone ‘Winston’ which has struck the Republic of Fiji, in South Pacific, our local centre has initiated extensive relief work in the affected areas. Since 25 February, Fiji centre has started providing free medical services through its medical centres in Nadi and Suva through which 513 patients have received medical attention till now. Moreover, the centre has so far distributed 4960 packets of agricultural seeds (10 varieties) among affected farmers in Ba and Tavua areas and 100 packets of food ration [each packet containing 2 kg rice, 1 kg dal and 1 kg salt] and various assorted clothing among distressed households in Ba area of Fiji.

Bangladesh: In the month of February, Dhaka centre, with the help of our Dinajpur centre, distributed 100 saris, and an equal number of dhotis, buckets, plates, tumblers, bowls, jugs and blankets to 100 families affected by disturbance in Habibpur village of Dinajpur district. Besides, along with our Barisal centre, the Dhaka centre distributed 800 kg rice, 160 kg dal, 16 kg salt, 80 litres of edible oil, 16 dhotis and 16 saris among 16 affected families in Barguna area of Barisal district in the month of April.

Buttermilk was served by our Chennai Math centre to about 10,000 people and by our Salem centre to 9277 people during the summer months.

In 2015–16, a total of 88,304 blankets and 8554 winter garments were distributed through 97 branch centres among the poor people affected by severe cold, flood, fire, etc.

West Bengal: As in previous years this year also, Seva Pratishthan centre organized a round-the-clock medical relief camp during Makar Sankranti Mela at Sagar Island in South 24-Parganas district from 10 to 15 January 2016. In all 5419 patients were treated, out of which 55 received indoor medical-care. Besides, 150 blankets were distributed among the poor pilgrims and monks. Moreover, the Headquarters distributed 450 blankets to the monks and mendicants of the Makar Sankranti Mela who visited Belur Math on their way to Gangasagar.

(a) Andhra Pradesh: A multipurpose building constructed by Visakhapatnam centre at Valabu village of Devarapalli Mandal was inaugurated on 6 January 2016. The building will house a non-formal education centre and will also be used for conducting medical camps, tailoring classes and other purposes. Moreover, the centre has undertaken a water supply project wherein nearly 10,000 metres of pipeline will be laid in 10 villages of Vijayanagaram and Visakhapatnam districts to facilitate the supply of clean drinking water from a faraway source.

(b) Tamil Nadu: Chennai Math centre has undertaken the construction of new low-cost houses in Meyyur village (Panrutti Taluk) of Cuddalore district for 60 poor families whose dwellings were destroyed in the recent floods. The centre is also planning the construction of a Community Hall. Construction work in underway. Chennai Students’ Home centre has undertaken the construction work of 19 new residential units and 13 additional toilet units along with a Community Hall for Irula tribals settled in Thathaimanji village in Thiruvallur district. Construction work in underway. Coimbatore Math has distributed various building materials to 6 poor families in Ponneri taluk of Thiruvallur district whose huts were washed away in the recent floods.

(c) Uttarakhand: The new 3-storied Girls’ Hostel building and the new 3-storied Post-Graduate block at the Annusuya Prasad Bahuguna Govt. Post Graduate College in Agastyamuni, Uttarakhand, constructed by the Headquarters, through our Dehradun centre, was inaugurated on 16 March 2016.

Nepal: Our Kathmandu centre distributed 5000 bamboos under ‘Build Your Own House’ scheme to 82 families from 4 to 12 February 2016. Galvanized tin sheets will also be provided to the affected families in due course.

In the year 2015-16, 91 of our branch centres distributed the following items to poor and needy people in their respective areas:

We express our sincere gratitude to all the volunteers and devotees for their painstaking hard work in these relief activities. We also extend our cordial thanks to all the donors, benevolent organizations, government officials and others for their participation and cooperation in this noble endeavour.

May the blessings of the Lord shower upon all!

Project on Emotional Well-Being of Kids during COVID-19 (Video)