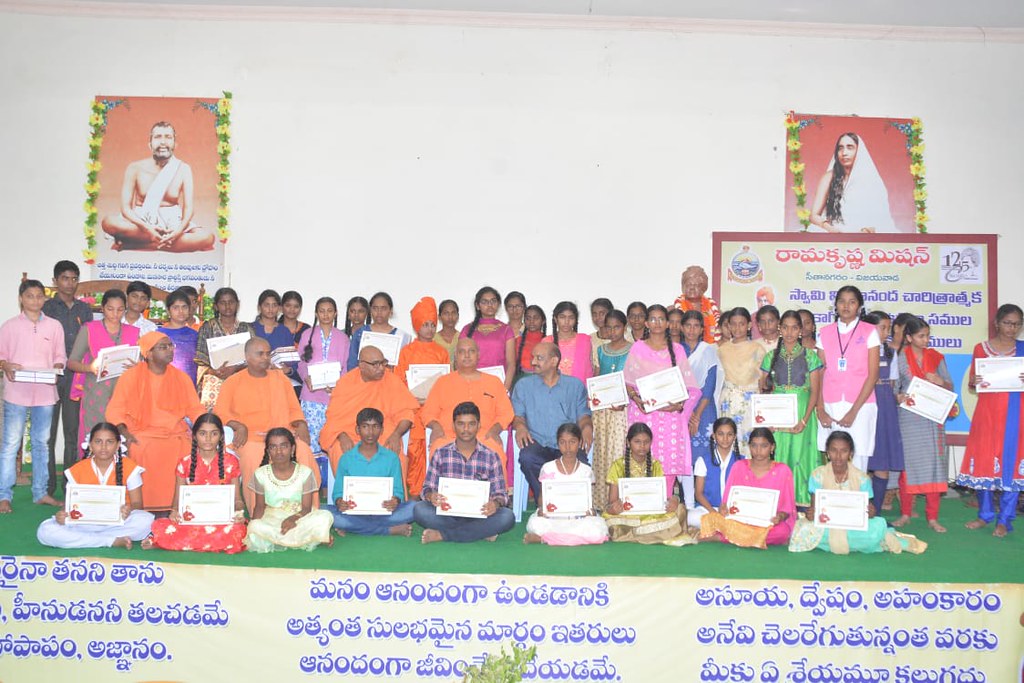 The following achievements of our students, staff and institutions in the year under review are worth mentioning:

The headmistress of Higher Secondary School of Chennai Mission Ashrama received Mahatma Gandhi Leadership Award from NRI Welfare Society of India (UK Chapter) at the House of Commons, London, and Dr Radhakrishnan Award from the Department of School Education, Government of Tamil Nadu, for her contribution to the field of education.

Two students of Imphal school secured the first and second positions at the state level in a painting competition on the theme ‘conservation of energy’ held by the Union Ministry of Power. Subsequently, one of them also won a prize at the national level of the competition.

Jhargram centre received a certificate from Vidyasagar College, Kolkata, and Association of Biomedical Sciences, Kolkata, in recognition of its performance in school education.

The Governor of Karnataka felicitated the principal of Sri Ramakrishna Vidyashala of Mysuru centre for the excellent results of the Vidyashala students in class 12 examinations.

A student of Mysuru Vidyashala was declared the best cadet of NCC Group Headquarters, Mysuru, in the junior division for the year 2018-19.

The under-14 and under-17 football teams of Narainpur school won the state-level Subroto Cup Football Tournament held at Narainpur. The school also won the overall champions trophy.

A class-12 student of Narainpur centre was selected for the under-18 national football team and played in the Asian Schools Football Championship held in Agra.

Three students of Purulia Vidyapith secured the top three ranks at the state level in the International Olympiad of Mathematics conducted by Silverzone Foundation, New Delhi.

Students of the high school secured 13 gold, 8 silver and 5 bronze medals in the International Mathematics Olympiad Examination held by Silverzone foundation, an NGO based in Bengaluru.

The high school was declared as a champion in Inter Ramakrishna Mission Football Tournament held on Saradapitha college ground.

The village Dhurleta in Ranchi district, where the Divyayan Krishi Vigyan Kendra of  Ranchi MorabadiAshrama had undertaken many initiatives to promote organic farming, was declared as the “first organic village of Jharkhand state”.